I have been cricket fanatic from childhood; of course my fanaticism was restricted to watching the game or listening to commentary. I was never good at playing the game. Even if the match was being played abroad, I would try to switch on the radio. However, tuning the radio to the required station, in those days, demanded tremendous skills and a steady hand. A little extra touch and the station would be lost.

I still remember 24th August, the day when Indian cricket crossed its last frontier then of beating England at their home in Oval in 1971. It was Ganesh Chaturthi and we all maternal cousins were at Harakuvar Bai Chawl in Girgaum at our aunt’s house. I am very sure Ganapati must have felt neglected on that evening. All the residents of the chawl were standing in the long common veranda with many radio sets tunes to the commentary. As soon as Abid Ali scored the winning runs, there were firecrackers all around as if it was Diwali. I am sure that the seniors must have heaved a sigh of relief as all the youngsters came back into their senses and returned to their respective houses.

My keen interest in cricket lasted for nearly 40 years from 1970 till about 2010. It is not that I don’t follow the game now but that mad mania has been lost in last decade with the advent of excessive cricket. The latest craze is T20 and IPL has ensured that it has become a cricket circus. I don’t feel like watching the entire match even though it is only 40 over game and gets over in about 3.5 hours. But during those days, Test Matches ruled the roost and we would make a beeline to the stadium even if it meant spending full five days. I would watch any test match whether it was against West Indies, England, New Zealand and of course Pakistan. It was not difficult to get a ticket for East Stand if not for North Stand. I also watched India Vs England World Cup Semi Final at Wankhede. I also never missed key games of Kanga League or Times Shield. It was a different world then.

We, friends, would have heated debates on cricket and unanimously Sunil Gavaskar was our idol. In our opinion, Sunny was technically the most perfect batsman in the world and only batsmen who came somewhat close to him were Sachin, Lara, Border, Ponting, Dravid and Laxman. One must never forget that Sunny played against most hostile bowlers without helmet and he was a true emperor (Andy Roberts had once said he hates bowling to Gavaskar as his defence against best deliveries was immaculate, he felt he is bowling against a wall). Then the most delectable and expert in placement of shots was none other than G R Vishwanath followed by Azhar. And of course who can forget Sandeep Patil for his sheer magic, style and grace though short lived due to lack of ambition. Similarly one can’t forget Bishen Singh Bedi who was all grace and guile; always gave an impression as an easy bowler to play but was full of surprises. Sehwag was technically imperfect but exciting to watch. Kapil put India on pace attack map. Sachin changed Indian mindset for one day games; he was also very innovative and exciting to watch and enjoyed his game thoroughly and finally most important was Ganguly who was a great captain who changed the culture & perception of the Indian team. Ganguly was the first true captain like a leader.

But we all used to agree that for sheer majesty, Sir Vivian Richards is unmatched even today.

From current lot, Virat is technically perfect but hardly exciting to watch as he appear to take the game too seriously. Virat seems to be an absolute professional like a EPL player earning money solely from playing.

The reason to remember all this was the upcoming cricket match between India and Pakistan in England. My brother as well as many of my friends are going to England only to see this match.

The terror attack at Pulawama and the subsequent retaliatory air strikes by India at Balakot had put a huge question mark on this match being actually played. There was a general consensus in February / March that India should not play against Pakistan under any circumstances. Then there was another opinion that politics should not be mixed with sports. I don’t want to get into the debate as to who is right or who is wrong. The decision has to be taken by the government as we general public are not aware about finer details about such events. Frankly speaking I feel we should not be aware of the nitty gritty. However during last few months, lot of water has passed under the bridge and things have calmed down. It now appears that match will be played between the traditional rivals.

Whenever India plays Pakistan, it seems like a mini war. Indians wouldn’t mind losing the World Cup provided we have won against Pakistan. Fortunately till date, India has never lost to them in WC. The Indian spectators, who otherwise may be at loggerheads, will be in unison for this match. Take a stroll in any city, one will realise the extreme polarisation during that time. If this is the situation outside, far away from the stadium, one can only imagine the atmosphere in the playing arena. That is the biggest test for Police to handle such explosive situation.

I used to always feel that I must be part such atmosphere at least once; preferably outside India so that situation may be little better. I had a chance in 2011 WC, when the Semi Final was to be played in Lahore. But somehow I developed cold feet at the last moment. Then exactly 4 years ago, they were to clash against each other in 2015 WC on 15th February at Adelaide. Fortunately my niece (actually I should say daughter, as I have had the good fortune of doing her कन्यादान) stays in Adelaide and her husband happened to be the member of the its cricket club. Hence managing the tickets was relatively easy. Hence both of us along with my sister-in-law and co-brother decided to go.

Before going to Australia, we did a one week tour of New Zealand and landed in Adelaide on 13th February. The match was scheduled to start around 2 pm but we decided to go little early to beat the traffic. We reached the stadium around 12.30 or so. The first glance itself was overwhelming as it was difficult to believe that we were in Australia. 80% of the crowd was Indians or Pakistanis; Australian white were very few and far between. It was like a one big carnival out there. The capacity of Adelaide stadium is around 53000 and Indians outnumbered Pakistanis by 2:1. My rough estimate is there were 30000 Indians and about 15000 Pakistanis and all others in the rest. Country flags, Oboe’s, Whistles and painted faces all around; one hell of a rocking party. 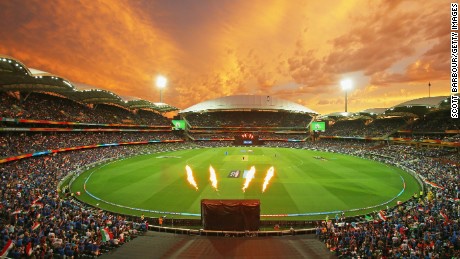 The moment the National Anthem was started, it was simply a experience beyond words. Singing Jan Gan Man with 30000 people was an unforgettable event. It is still giving me goosebumps while writing this.

India elected to bat after winning the toss and fortunately there was a great start. Rohit Sharma got out early but Shikhar Dhawan, Virat Kohli and Suresh Raina went hammer and tongs against the hapless Pakistan bowling attack. At one point the projected score was in excess of 350; but Pakistan came back strongly in last few overs and restricted India to score of exact 300. Once India innings was over, surprisingly both supporters were cursing their own team. Indians felt they were 50 runs short; Pakistanis felt they gave away 50 runs extra; and both sides kept on saying अगर वैसा होता तो सालोंकी xx मार देते, अब देखते है की क्या होगा.

While Pakistan batted, they kept on losing wickets at regular intervals. That was enough for Indians to mock at Pakistanis. The whole stadium turned into a festive mood. If I remember right Shahid Afridi got out at the end 34 overs and the stadium erupted into भारतमाता की जय and the entire arena was reverberating with that chant. It was a celebration time. But that was the time Pakistanis started to leave the stadium. We were allowed to take beer glasses (of course plastic) to our seats and it was all the more fun. I think we drank much more beer than we normally would.

Finally India crushed Pakistan by 76 runs and we felt that it was worth all the efforts of going all the way from India only for that one match.

Today when I look back, I feel that this one match was a high water mark in my life for watching live cricket. That was like atop Mount Everest. Funnily enough, I haven’t felt like going to a cricket match in a stadium after that and I don’t think I will go again. Ultimate fulfilment!!!

All the best to the Indian Cricket Team. Hope they continue the record of being undefeated against Pakistan in World Cup.

One thought on “Cricket Mania”

This site uses Akismet to reduce spam. Learn how your comment data is processed.